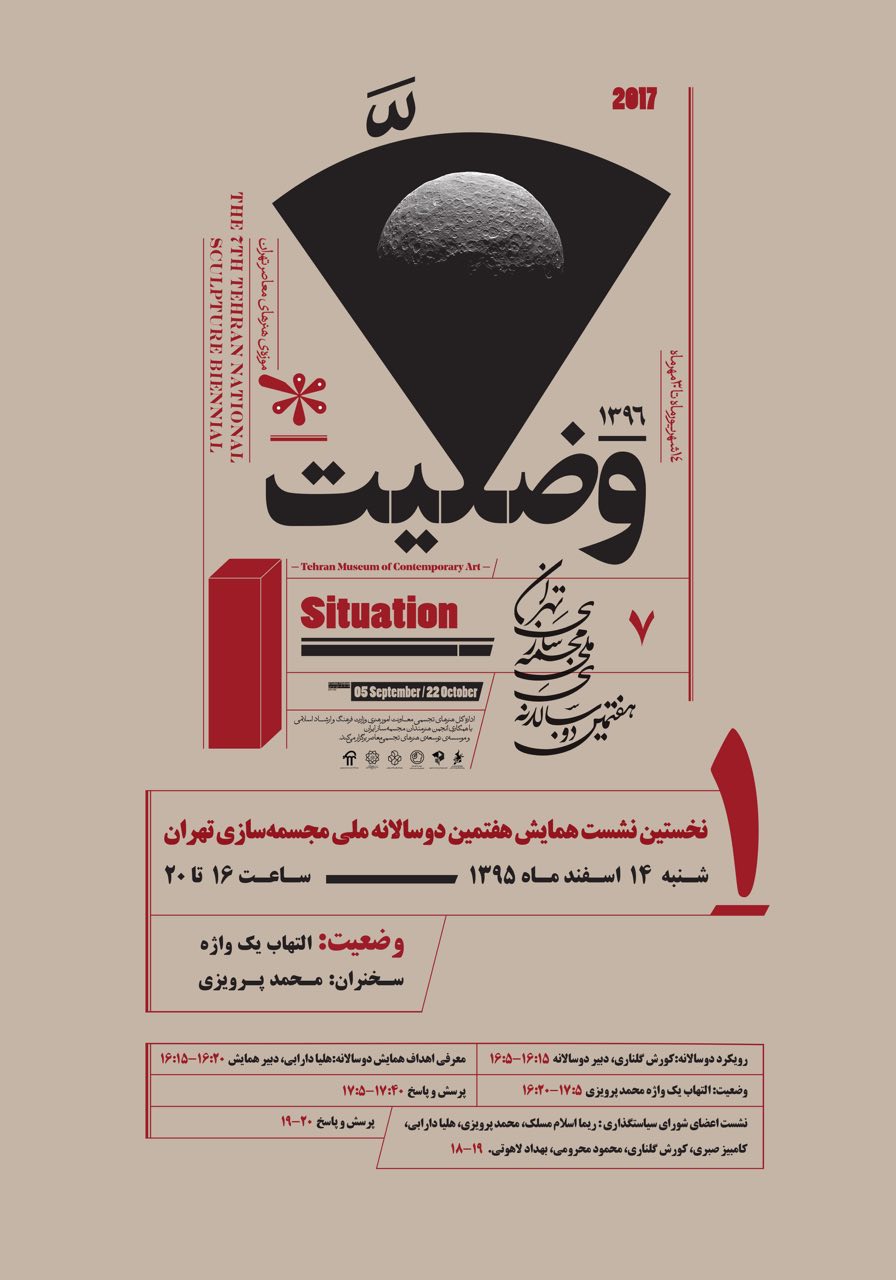 Introduction
Defined as essence and substance, theme lays the groundwork for the line of thought the artist follows in creating the work. For the directors of an artistic event, however, it provides a major intellectual and strategic framework for mapping out the general significance of the exhibition. Establishing the theme as the approach and policy of an artistic event allows for giving the constituent signifiers a specific direction, thereby saving us from the infinite whirlwind of dispersed concepts, which makes a collective reading of the works possible. After all, comprehension is subjective and the exhibition’s intellectual framework offers the prospect of reading within a collective context and the opportunity to reflect on questions such as the following: where does this event stand in relation to society? How can we channel individual efforts in favor of collective experience? How can we demonstrate the outcomes of such great extent of group work?
A policy which involves selecting a theme – in the sense just discussed – for an event, works both implicitly and explicitly. Equipped with a powerful strategy, the implicit aspect can result in ideological readings. Thus, an awareness of the nature, the origin and the function of such strategies as well as identifying their underlying motivations through analysis and criticism is of great importance. On the other hand, chosen wisely, the intellectual framework can be strikingly rewarding. Not only does it provide the artists with an array of rich ideas as their working material, but it can also offer fitting responses to social circumstances or lead to the emergence of a dialogue between the works and social sentiments. Temporalizing experience, making use of the collective energy provided by an event in order to understand the conditions and circumstances in which we live or to pursue cultural goals and intentions are some of the other advantages offered by such an the intellectual framework.

(condition)
The Inflammation of a Word
“condition” is a word which draws strength from society and our living circumstances, incorporating vast shades of meaning. It is as though the very word at issue is “inflamed”. Our collective preconceptions dislocate this word, forcing it to abandon its regular sense and take on metaphorical significance. From a political or social condition to a critical one and more, it is so sudden that any preceding or following word is rendered in a new light. It can act as an impetus to trigger a force or determine the course of an intellectual framework. Such a word is a sort of warning; what condition?
But what grants this word its uniqueness is its reference to the notion of periphery, that is, what we are surrounded with. In this sense, we are within the condition rather than outside it. We can hardly break free from it. This is the capacity to regard oneself from within the periphery, to reject a mass of labels and to refuse to become lost in their glamor in order to comprehend one’s circumstances. This awareness of one’s own condition evokes Giorgio Agamben’s notion of “the contemporary”:
Those who are truly contemporary, who truly belong to their time, are those who neither perfectly coincide with it nor adjust themselves to its demands. They are thus in this sense irrelevant. But precisely because of this condition, precisely through this disconnection and this anachronism, they are more capable than others of perceiving and grasping their own time. (40)
Therefore, any possible condition – political, social, etc. – is a subset of and points to the general condition surrounding us. This peripheral condition is multifaceted and defies a linear reading from a historical perspective. Anything remote can readily take place and anything at hand can be hurled into the remotest distance. In terms of temporality, peripheral condition belongs neither to the present, nor to the future nor to the past. Time in the peripheral condition is concentrated and simultaneous. It makes for a floating situation where everything shifts in a single moment. Future prospects imagined find their way to the past and since both coincide in the present, the current time is not one of them but the three at once. Politically and socially speaking, peripheral condition is complex. It has been overcome with the notion of power which has breached various aspects of language and culture. This labyrinthine pattern has an intricate structure. In this periphery, the mental condition is dense and turbulent and the facets of knowledge compact and layered.
In the light of a concern for peripheral condition, an inquiry into the ideas of Iranian thinker, Dariush Shayegan, seems a relevant task. Shayegan’s intellectual project can be considered an elaboration on and an illustration of the peripheral condition.

Condition in Shayegan’s System of Thought
“The Overlapping of diverse consciousnesses.” “The fusion of senses and multisensory modes of perception.” These are some of the metaphors Shayegan offers to refer to such a condition. This is where he sets off, tracking a path towards the periphery, encountering and passing through civilizations, cultures, opinions and beliefs. The intention is not to show their integration, but to specifically acknowledge those novel situations which lead to the formation of new identities. In other words, Shayegan does not seek to provide a comparative exploration of these issues; rather, considering the peripheral condition as the ontology of contemporary individuals, he tries to observe it from different angles. His is an attempt to reveal the obstacles along the way to establish a constructive condition.
Thus, our constructive contexts are diverse and heterogeneous. We no longer share a common root embedded in isolation in a particular territory. We are rhizomes in a network of varied people, cultures, universes, and perceptions. This condition turns us into nomads growing up outdoors as our life style determines our insights. Depending on the connections we make in different contexts, we can settle in a position differently. Nowadays, no one is impervious to these contacts, these areas of association and intercourse, this mayhem we can call our life style in the world. (153)
In order to settle in the new context, Shayegan initially sees to render unsecure all secure mental states, disrupt the continuity of experiences, and shift from progression to simultaneity. Accordingly, a critique of the current peripheral condition depicts it as leading to the “phantomization of the universe” and, more broadly, to a form of “re-enchantment”. In other words, the whole condition becomes deluged by explications and interpretations to the extent that the entire universe shatters and disappears into distant horizons. These interpretations no longer rely on any basis and stick in our imagination like floating fragments.
Shayegan suggests that a metahistorical dialogue with these fragments is a prerequisite for safe passage through or settling in the new context. To be exact, the seventh chapter of his Ex occidente lux titled “The Lost Continent of the Spirit” opens this dialogue. He attempts to seize these hovering fragments through transmutation. Whether we agree with his approach or not, Shayegan’s interpretation raises a very important issue.
To shed further light on the matter, we need to allude to a key point he makes in discussing an “inter-epistemic” condition:
We are living in an inter-epistemic condition whereby our spirit is still at the magical level of symbols, allegories, and empathies feeding on the rich source of collective memory. Therefore, this condition does not keep up with notions emerging in successive leaps of the new era. In other words, our collective consciousness is rooted in a metaphysical experience where the allegorical nature of symbols is still relevant. Our perception is still entranced by eternal cultural forms and our spirit floats in a space of social sympathy. The “I” fades into the collective “self”. (191)
Such concern for how presumptions hold sway over our interpretation of the world, marks the apex of Shayegan’s thought. He reveals the way in which “collective consciousness” penetrates our peripheral condition and how it defers our perception. We reflect on new circumstances in light of this voluminous repository and eventually meaning emerges out of the inter-epistemic spiral. Through his metaphysical presumptions, Shayegan reads and interprets the peripheral condition so as to expose the impact of the powerful (metaphysical) foundation of “collective consciousness” on our understanding and perception. He considers our internal condition a metaphysical one. We take in experiences through this mental/imaginary channel. One could say these assumptions prevent us from an unmediated encounter with phenomena. Shayegan’s reading allows them to find their way to the forefront, hence laying bare their horrifying force. This is a rhizomatic network of delicate texture resembling a painstaking elaborate tableau or bricolage . . .